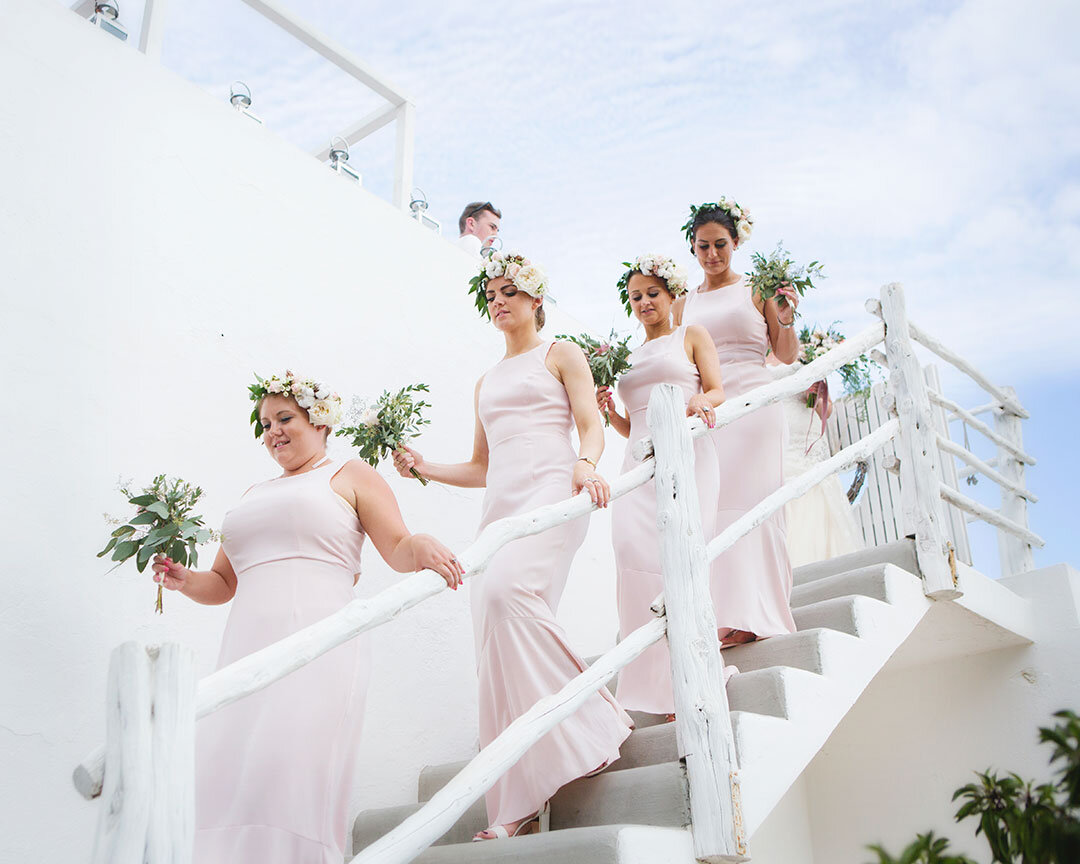 Why do we need bridesmaids and groomsmen?

When planning a wedding you know all the traditions you should follow (or break!), but have you ever given a thought to where the traditions started?
We have been looking into the history of some of the most well-known wedding traditions, starting with the role of your wedding party!

As with many things, bridesmaids have multiple origins, which lead to the Bridesmaid as we know them today. In fact, bridesmaids have been present at weddings as far back as biblical times. During Jacob’s marriage to Leah and Rachel, each woman brought a female maid to stand beside her, literally being the brides’ maids.

During Ancient Rome a bride would be accompanied by her bridesmaids when travelling to her groo’s village. They would serve as a shield of sorts, protecting the bride from vengeful former suitors, or thieves determined to steal her dowry.

In later Roman times, the bride would have up to ten bridesmaids who would accompany her during the wedding day in almost identical dress. This would outsmart evil spirits who were often present at wedding ceremonies. This superstitious belief carried through to the Victorian age. Due to the risk of harm, it wasn’t considered an honour for bridesmaids during these times.

In more modern times, bridesmaids dress identical, but in a colour to set them apart from the bride in white. Although, it is becoming common for bridesmaids not to match, with brides allowing them to choose their own colour from the wedding scheme, or their own style of dress. Furthermore, bridesmen are also common in modern weddings.

Due to the risk of harm, it wasn’t considered an honour for bridemaids during these times.

Maid or Matron of Honour

The Groomsmen (or Ushers)

Your groomsmen or ushers certainly have a darker history when it comes to weddings. Although it is hard to pinpoint exactly when it started, groomsmen were often called the bride’s knights and they held a very important role in making sure a wedding happened. It was their job to ensure the bride made it safely to the wedding ceremony, frequently kidnapping the bride from her home and her disapproving parents.

Once the bride was safely escorted to the ceremony the groomsmen would then guard the bride to ensure nothing interrupted the ceremony. As such, they would stand on the right of the bride, allowing easy access to their sword if needed, and close enough to stop the bride from running away.

The best man would be by the groom’s side throughout the courting process during the 16th century, even going so far as to fight any over potential suitors alongside the groom. The first documented usage of the term best man was in 1782, before that he was often referred to as the bridesman – which holds a different meaning in modern weddings.

…even going so far as to fight any over potential suitors alongside the groom.

What other traditions make you curious about their origins?

← What order should your wedding speeches run? A Sustainable Urban Café Elopement →
We use cookies on our website to give you the most relevant experience by remembering your preferences and repeat visits. By clicking “Accept”, you consent to the use of ALL the cookies.
Cookie settingsACCEPT
Manage consent

This website uses cookies to improve your experience while you navigate through the website. Out of these, the cookies that are categorized as necessary are stored on your browser as they are essential for the working of basic functionalities of the website. We also use third-party cookies that help us analyze and understand how you use this website. These cookies will be stored in your browser only with your consent. You also have the option to opt-out of these cookies. But opting out of some of these cookies may affect your browsing experience.
Necessary Always Enabled
Necessary cookies are absolutely essential for the website to function properly. These cookies ensure basic functionalities and security features of the website, anonymously.
Functional
Functional cookies help to perform certain functionalities like sharing the content of the website on social media platforms, collect feedbacks, and other third-party features.
Performance
Performance cookies are used to understand and analyze the key performance indexes of the website which helps in delivering a better user experience for the visitors.
Analytics
Analytical cookies are used to understand how visitors interact with the website. These cookies help provide information on metrics the number of visitors, bounce rate, traffic source, etc.
Advertisement
Advertisement cookies are used to provide visitors with relevant ads and marketing campaigns. These cookies track visitors across websites and collect information to provide customized ads.
Others
Other uncategorized cookies are those that are being analyzed and have not been classified into a category as yet.
SAVE & ACCEPT